How one enterprising vegetable grower is changing attitudes and diets among Africa’s high-protein consumers. 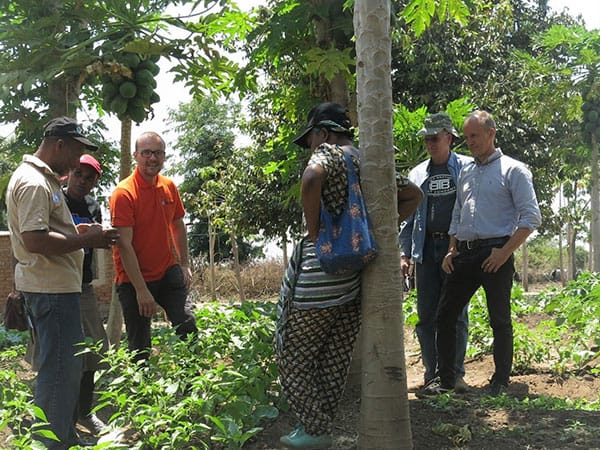 Athuman Ally (left) explains his approach to marketing vegetables to the Maasai to a team of WorldVeg staff.

Cattle represent wealth for the semi-nomadic Maasai people of southern Kenya and northern Tanzania, and with good reason: Nearly all of the Maasai’s needs for food are met by their cattle. They eat the meat, drink the milk daily, and drink the blood on occasion.

And vegetables? In general, the Maasai say these crops are for feeding animals. You’ll seldom find vegetables as part of daily Maasai meals. The reputation of vegetables as a food source is so low among the Maasai that the best way for a Maasai girl to indicate she is no longer interested in a relationship with a young Maasai man is to serve him vegetables.

Rather than viewing the Maasai’s traditional reliance on meat and milk as an unchanging and unalterable situation, Athuman Ally, a vegetable grower in Kakoy village, Nkaiti ward, Bababti district, Tanzania, chose to think about it as a market opportunity.

Ally, a community-based trainer in the Homegarden Scaling Project has been increasing the amount and number of vegetable varieties he grows and is selling the fresh produce to his neighbors—the Maasai.

Ally realized that in a largely pastoral area, a guy who is doing something a little different is going to stand out. “I can make more money from vegetables than from livestock, which everybody raises,” he said.

With a market niche targeted, Ally set out to gradually expand his farm. He’s now producing amaranth, nightshade, Ethiopian mustard, cabbage, cucumber, sweet potato leaves, African eggplant, pumpkin, tomato, pepper, and eggplant. He works with his wife and young sons and daughters in the garden, while older children take care of animals in the bush. His adult son helps by hauling mud out of the 25-foot-deep irrigation well—a tricky and dangerous procedure as the well’s walls are not fortified. Ali has plans to strengthen the walls with brick and cement in the future.

His vegetables serve both home consumption and business. For example, he sets aside one bed of nightshade for the family and sells the other. Most of his customers are Maasai.

His most pressing need is to protect his crops from wild animals and wandering livestock. His farm is very close to Tarangire National Park, and elephants come out of the park at night to sample Ally’s tomato and African eggplant, two pachyderm favorites. They also devour cucumber, but do not seem to like leafy vegetables.

To remedy the situation, Ally keeps his dog outside. If the dog barks, Ally knows there is trouble and comes out with a bright torch; the light is enough to scare the elephants away from the midnight buffet.

Ally grows vegetables for the nutrients they contribute to his diet, and is especially partial to African nightshade and amaranth. He says he is healthier now because he eats vegetables. He’s not alone: Information about consuming a balanced and diverse diet is also reaching the Maasai. When people go to area clinics, they are advised to eat more vegetables. Many women now recognize Ally as an important source of information on how to grow and prepare vegetables.

During a recent visit by a WorldVeg team, well-respected Maasai man who had just bought cucumber and papaya stopped by Ally’s farm. Michael Melao Saruni, a councilor in Nkaiti ward, said he has started to develop a liking for vegetables, and that his family now eats fruits and vegetables. He also added that vegetables help improve eyesight and lower blood pressure. Quite an astonishing development from a member of a tribe for which meat has long been the main (and only) dish!

Ally has created a lot of awareness in his community about the importance of vegetables for balanced diets. He conducts his own research: He planted hot pepper with Ethiopian mustard to see if this would help fight insect attacks on the mustard plants (using four replications), uses marigold to repel insects and nematodes, and practices crop rotation.

The community-based trainers participating the Homegarden Scaling Project organize meetings and train at least 20 fellow farmers to set up vegetable gardens based on WorldVeg best practices. Partner institute Helen Keller International works closely with the trainers, who are all volunteers. The project uses the CABI Plantwise app to facilitate recognition of pests and diseases, and through a partnership with Farm Radio International, WorldVeg is spreading the message about the benefits of increasing vegetable consumption among the Maasai and others in eastern Africa. 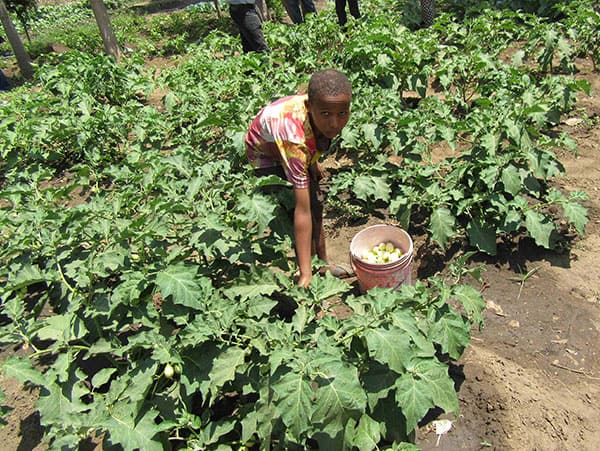