With solid support from the highest levels of government and new projects soon to start, AVRDC is ready to extend its expertise to Myanmar, a nation emerging from isolation.

For decades, Myanmar has been cut off from much of the world, and travel there has been difficult. AVRDC’s germplasm could get in, but not its senior management.

Despite their isolation, Myanmar scientists have produced eight new tomato varieties and hybrids based on AVRDC germplasm. However, their greatest success has been with mungbean, which is now a major cash crop. Myanmar is one of the world’s largest exporters of the legume, but this success is threatened by the spread of Mungbean yellow mosaic virus.

AVRDC will soon start a five-year project to improve mungbean breeding and seed production in Myanmar, Bangladesh and India with funding from the Australian Centre for International Agricultural Research (ACIAR).

The AVRDC team spent a morning in detailed discussions with the Minister for Agriculture and Irrigation, His Excellency U Myint Hlaing, after visiting a government demonstration vegetable farm. “There is a new window for collaboration especially at the technical level,” the minister said. He emphasized Myanmar’s abundant natural resources, the importance of expanding vegetable production, and the government’s strong commitment to encouraging private sector investment. He was extremely supportive of AVRDC’s involvement in strengthening the vegetable sector, and later put this in writing with the endorsement of the Vice President. The visit also received national TV coverage.

“We could not have asked for a more positive start to our relationship with Myanmar,” said Dyno Keatinge. “Our hosts could not have been more helpful.” While the ACIAR mungbean project will lay the foundation, Dyno said, “we are also seeking additional projects and are committed to having a permanent AVRDC staff presence in Myanmar in the very near future.”

Dr. Shwe emphasized the importance of mungbean as a cash crop for farmers, “particularly in this year, as many rice crops have failed due to drought, and farmers have changed their cropping pattern.”

Myanmar vegetable production is severely constrained by a lack of skilled government horticulturalists, with only 24 scientific staff to service the needs of the whole country. The new Director General of the Department of Agricultural Research, Dr. Ye Tint Tun, strongly endorsed the growing relationship between AVRDC and Myanmar, and opportunities for both capacity building of his staff as well as technical collaboration. 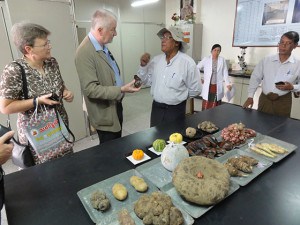 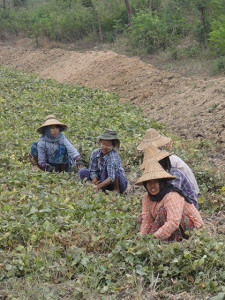 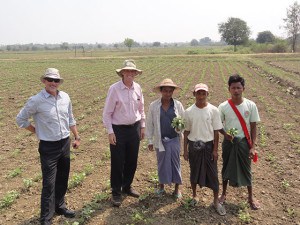