Chili pepper is an important export crop for Fiji. Severe outbreaks of chili fruit anthracnose were observed in 2010 and the pathogen was identified as Colletotrichum acutatum. This pathogen is a species complex with large variation. This study characterized the pathogen population associated with the recent outbreaks to clarify the pathogen identity. A total of 26 isolates from diseased fruits were collected from six provinces in 2012 and 2013. The isolates were examined for their morphological and cultural characteristics, and for restriction fragment of length polymorphism (RFLP) and sequence variation of the internal transcribed spacer (ITS) region of ribosomal DNA. Phylogenetic analysis based on the ITS sequence placed all the representative Fijian isolates with C. simmondsii (formerly A2 molecular group of C. acutatum), except one isolate from Tavua as C. gloeosporioides, and one isolate from Lautoka as C. truncatum. The three species were differentiated by the ITS-RFLP patterns produced by AluI, BamHI and RsaI. Results of molecular identification were in agreement with the conventional methods. In summary, C. simmondsii is the predominant pathogen causing chili fruit anthracnose in Fiji. It had slower growth rate (6-9 mm day-1), fusiform or cylindrical conidia with acute end, and positive protease activity. Sequence variation of additional housekeeping genes should be adopted to further understand the phylogenetic relationship of Colletotrichum species associated with chili fruit anthracnose in Fiji and those present in the other parts of the world, as it would provide more information on the possible origins of the pathogen present in Fiji for quarantine and disease management actions. 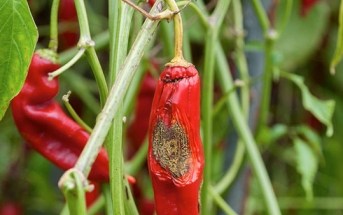