Bitter gourd (Momordica charantia) is widely cultivated as a vegetable and medicinal herb in many Asian and African countries. After the sequencing of the cucumber (Cucumis sativus), watermelon (Citrullus lanatus), and melon (Cucumis melo) genomes, bitter gourd became the fourth cucurbit species whose whole genome was sequenced. However, a comprehensive analysis of simple sequence repeats (SSRs) in bitter gourd, including a comparison with the three aforementioned cucurbit species has not yet been published. Here, we identified a total of 188,091 and 167,160 SSR motifs in the genomes of the bitter gourd lines ‘Dali-11’ and ‘OHB3-1,’ respectively. Subsequently, the SSR content, motif lengths, and classified motif types were characterized for the bitter gourd genomes and compared among all the cucurbit genomes. Lastly, a large set of 138,727 unique in silico SSR primer pairs were designed for bitter gourd. Among these, 71 primers were selected, all of which successfully amplified SSRs from the two bitter gourd lines ‘Dali-11’ and ‘K44’. To further examine the utilization of unique SSR primers, 21 SSR markers were used to genotype a collection of 211 bitter gourd lines from all over the world. A model-based clustering method and phylogenetic analysis indicated a clear separation among the geographic groups. The genomic SSR markers developed in this study have considerable potential value in advancing bitter gourd research. 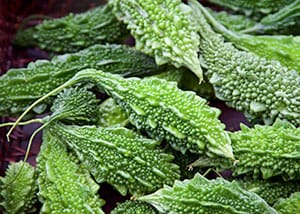