Lack of dietary diversity is a key causal factor of malnutrition in Burkina Faso because the population consumes mostly cereals crops. Nutrient‐dense traditional African vegetables provide an excellent means to complement cereal staples for better nutrition, in particular for women and children, as well as for income generation. This study characterized the production of traditional African vegetables in Burkina Faso based on a questionnaire administered to 250 respondents. Results indicate the majority (75%) of the producers had no formal education and generally practiced gardening in lowland areas near water dams and streams. Tomato was cultivated by 35% of the respondents, followed by okra (32%) and African eggplant (20%). Overall, more land was used for traditional African vegetables compared to exotic species, but individual global vegetables occupied more space than traditional vegetables; tomato was produced on 467 m2 and okra on 315 m2. About 98% of the producers practiced manual irrigation with watering cans, compared to only 1% for drip irrigation. Soil and water conservation options such as mulching and zaï were practiced by 76 and 21%, respectively. The producers were quite familiar with and had access to improved seeds (73.2%), chemical fertilizers (72.4%) and nursery techniques (69.6%), but were less knowledgeable about postharvest handling, integrated pest management and biological control. There is ample scope for improving vegetable production practices through capacity building coupled with sensitization for increased consumption of traditional African vegetables. 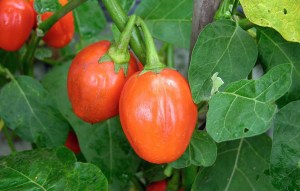