Karnataka is one of the leading horticultural states in India and one of its largest and most advanced tomato producers.  An invasive pest is devastating its crops, but WorldVeg staff have found a solution that has the enthusiastic support of farmers and government alike.

The tomato leaf miner (Tuta absoluta) is a new and growing global problem of tomatoes that has spread rapidly across South Asia in recent years.  One female moth can lay 250-300 eggs, and larvae cause direct damage to the plant and fruit, which is exacerbated by secondary pathogens entering through the wounds, leading to yield losses of up to 90%.  Farmers in Karnataka spray pesticides every two weeks in futile attempt to control the pest.  Badly damaged crops are often abandoned and become a major source of infestations in neighboring areas.

“It’s now infecting crops during all three tomato cropping seasons,” warns Kumar Nagaraju, who leads the WorldVeg field team for the Bhoo Samruddhi project funded by the Karnataka government. He and his team have been tackling Tuta, with some amazing success.

In early 2016 WorldVeg staff approached the Pesticide Company of India, a major manufacturer of biological insect pest management products, to see if they had anything that might be tried against Tuta.  They had nothing definite, but suggested trying a combination of pheromone lures and yellow sticky traps typically used against sucking insects.

Kumar and his team set up a trial on 15 farms in Chickmagalur district, a major tomato growing area in southern Karnataka.  Four different combination treatments of yellow sticky traps, pheromones, and a water lure were compared to controls using conventional practices. WorldVeg was the sole institution in the state to set up farm-sized demonstrations.

All field operations were recorded along with yields, and the yellow sticky trap with pheromone lure worked best. In control fields farmers sprayed 12-15 times for Tuta, but using the traps and lures they sprayed only 2-3 times. Farmers using the traps had yields of 46-53 t/ha— about 30% higher than those of farmers who did not.

Farmers needed to use one trap per 100 m2, and with an average trap cost of 50-60 Rupees (less than US$ 0.90), the total cost is only a small proportion of the overall growing costs.

The participating farmers were delighted, and so were senior government officials who visited the trial site, desperate for effective controls against the devastating pest.  After her visit in late 2016, the CEO of Chickmagalur district, its most senior public servant, called a meeting with the Horticulture Department and immediately authorized more than 700,000 Rupees to provide yellow sticky traps and lures to 600 local farmers in an emergency response to scale up the effective control measures confirmed and promoted by WorldVeg.

This tomato season Kumar and his team are targeting a key source of the problem: the tomato seedlings from which most crops in the state are grown.

“Infection starts in the nurseries,” says Kumar.  “It is a very important stage, and once an infection starts there it spreads to farmers’ fields and multiplies. We have 49 tomato nurseries in Chickmagalur district, but none are professionally run and they are a continuing source of field infestations.” Training programs for nursery operators are now underway to promote effective insect screening to prevent early Tuta infections.

This season several new lure dealers have set up shop in the district to meet the rapidly growing demand for lures and traps; two or three competitors have started producing them.

The problem will not be solved overnight, but WorldVeg has been instrumental in finding and promoting a practical solution to a pest that is devastating tomato crops worldwide. 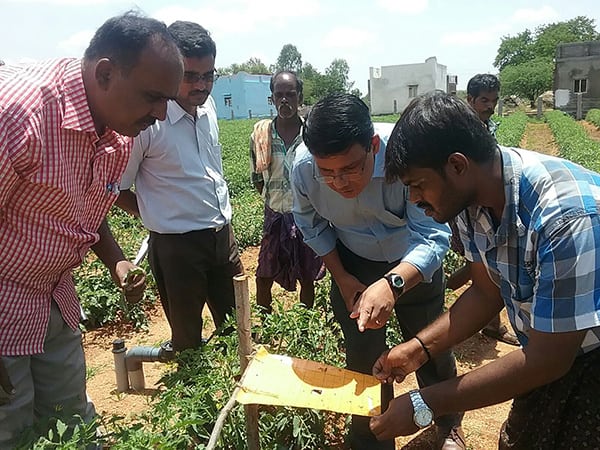 The WorldVeg team checking a pheromone trap. The traps can be used to monitor pest populations. 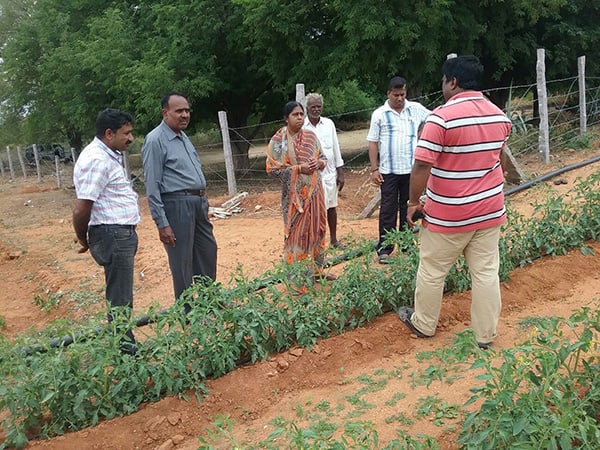 On a field visit with local government scientists to discuss Tuta surveillance and control strategies. 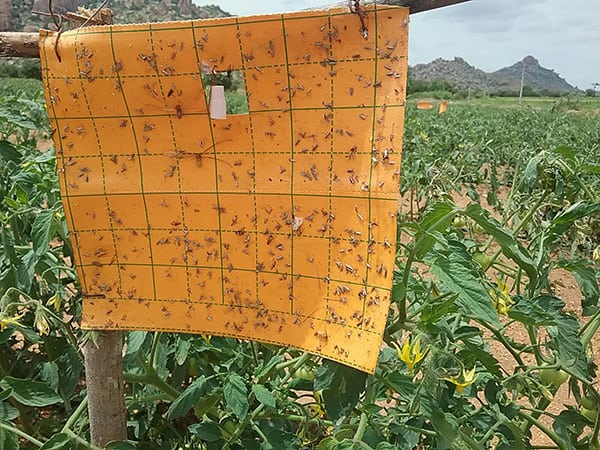 A sticky pheromone trap attracts and captures the pest.