Money: the root of all value chains

A recent action learning exercise to develop a successful packhouse led by WorldVeg in Bangladesh gained national recognition but revealed the complex set of skills and interventions needed to make it sustainable.

In late 2015 the Bangladesh team managing the USAID Postharvest Project set up a demonstration of a model vegetable packhouse at a collection center in Hoybutpur in Jessore in southern Bangladesh. The center was one of 95 collection points built by the Bangladesh Department of Agricultural Extension with funding from the Asian Development Bank; it was selected by the WorldVeg team because it was supported by an active farmers’ co-op and located near a large vegetable market.

The collection center was little more than an empty shed without power. Working with the co-op, WorldVeg provided key pieces of postharvest equipment including a Coolbot, crates, a sorting table, racks, scales, and washing and packing facilities. The co-op’s 150 farmers received training to use the equipment and learned proper postharvest practices to maintain quality. As a comparison, 150 farmers in a neighboring collection center were given the same training, but were not provided with any equipment.

The difference in training and access to equipment proved crucial when a major business opportunity for both packhouses later arose.

“If you do postharvest training you also have to provide the market linkages to make it worthwhile for farmers to put that learning into practice,” said Razu Ahmed, leader of the WorldVeg project team.  “Otherwise there is no point in them going to all the extra effort.”

The next few months then became an intensive lesson in market economics as the researchers tried to find new markets for the cabbage and cauliflower crops rapidly maturing in Hoybutpur.

“The Department of Agricultural Extension staff and the farmers’ co-op didn’t have the experience or contacts,” said Razu.  He and his small team found there was no price advantage in supplying local markets, and transport costs ruled out the option of supplying the distant capital city market in Dhaka.

In desperation, Razu contacted an exporters’ association in Dhaka and after many false leads finally found a buyer who wanted cabbage and cauliflower shipments to supply markets in Malaysia and Singapore, but was having difficulties obtaining the right quality from the open market. Razu brought buyers and sellers together in a contract for a win-win situation, connecting 73 farmers in the two groups who had crops in the ground to supply the exporter with high quality produce.

The hands-on training one group had received in postharvest management proved to be critical in helping them to succeed while their neighbors did not.  A group of 33 farmers in Hoybutpur that had received full hands-on training and equipment on which to practice what they had learned was able to sustain the quality of produce required by the exporter—and eventually shipped 274 tonnes of cabbage and 14 tonnes of cauliflower for export to Malaysia. However, the exporter bought only one shipment from the neighboring group due to poor quality control.

The Hoybutpur farmers were delighted with the high export prices and the exporter was pleased with the consistent quality provided by the farmers trained and equipped by WorldVeg.  From mid-December to 20 January everyone was happy: the national media got hold of the story, and several TV channels provided excellent coverage of the USAID Postharvest Project, highlighting the export success story led by a cooperative of smallholder farmers.

However, the reality was more complex, and problems soon became apparent.  The exporter promised certain prices to the farmers, but then did not provide them. The farmers sold produce outside their contracts. These actions reduced trust on both sides. By late January the market price dropped and the buyer went elsewhere looking for cheaper produce.  From being the unsung heroes of the high prices, WorldVeg staff then became the scapegoats tasked with solving the price drop.

The experience showed that the most complex aspects of postharvest management are social, rather than technical.  Postharvest occurs at the end of the value chain, where the most money and trust is involved. Connecting buyers and sellers requires business acumen and different skills from research or training.  Each player in the value chain has specific problems and needs, and sustainably strengthening value chains requires working with various groups, using very different sets of skills and approaches. “There’s value even in tough experiences like this one,” Razu said. “Our challenge is to use what we have learned to sharpen our marketing skills and to help others do the same.” 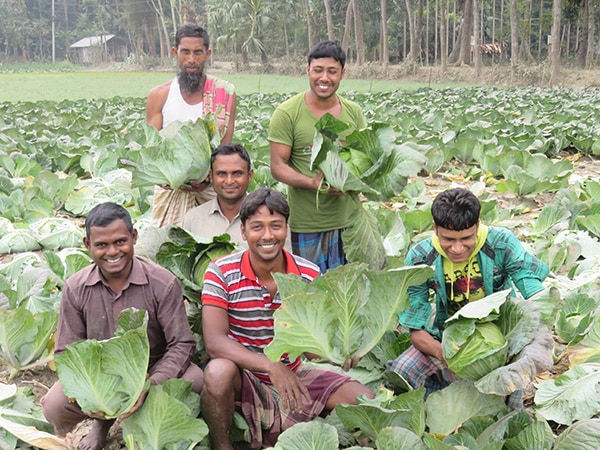 A bumper crop ready to pack for export. 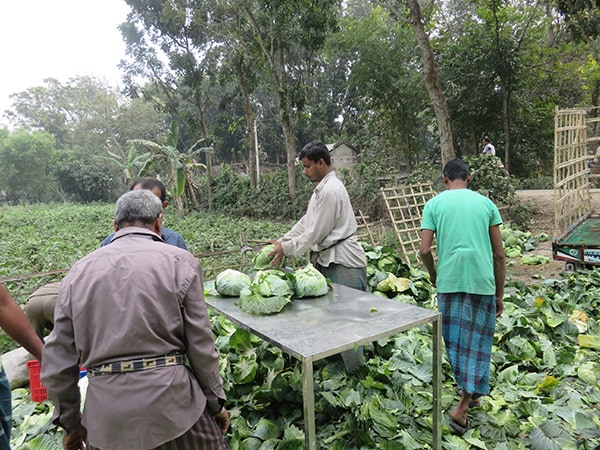 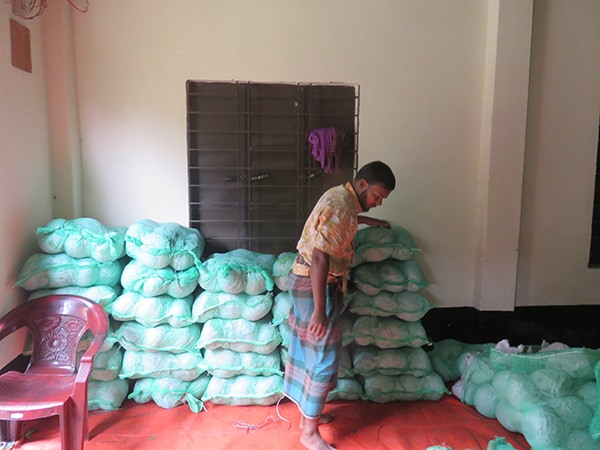 Sorted, packed, and ready for transport.