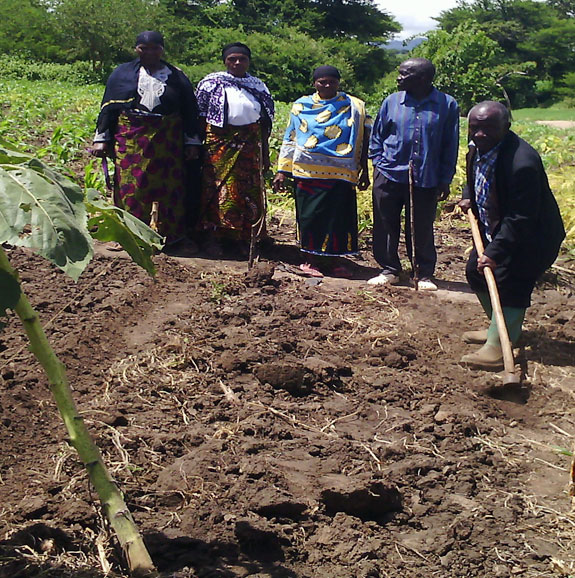 Mr. Puputo (with the hand hoe) teaches other farmers how to prepare a plot.

“When the World Vegetable Center/HORTI Tengeru team delivered the training in our village last year, I thought of adopting the practices taught and the varieties given by the project,” said Omary Puputo, a 69-year-old man in Sunya village with the energy and drive of someone much younger. “No farmer in our village had ever tried integrating maize with vegetables. But I did—and it turned out to be very successful. I could contribute more vegetables to feed my family, and I sold a lot, too. So much that I don’t need to weed my fields anymore, since I can pay others to do it for me!”

Mr. Puputo is the chairman of the Sunya farmers’ group trained under the Africa RISING-NAFAKA partnership project for fast tracking delivery and scaling of agricultural technologies in Tanzania.

From the varieties introduced by the World Vegetable Center, Mr. Puputo integrates amaranth (Madiira I), African nightshade (Nduruma) and jute mallow (SUD 2) into his one-acre maize field. In the first season, he integrated African nightshade in his maize field and harvested 1600 bundles, of which 300 bundles were consumed by his household and neighbors and 1300 bundles were sold for TSH 200-300 per bundle. This brought him an additional profit of TSH 330,000 [USD 157] after harvesting maize, when the land usually is left fallow.

“Last year (2015) was a bad year with very low maize yields due to a severe drought,” he said. “But the vegetables contributed a lot to our household income and consumption. And this actually brought my attention to the fact that vegetables can do what cereal crops might not—namely, to gain yields in times of climate variability.” Encouraged by last years’ results, for the 2016 season Mr. Puputo planted three leafy vegetables. On another one-acre plot he planted amaranth, African nightshade and jute mallow together with maize. Leaving one meter of space between the maize rows, Mr. Puputo sowed two rows of one of the leafy vegetables.

Mr. Puputo has been a beneficiary and became a strong disseminator of the trained technologies in his village. “Improved varieties and agronomic practices changed my normal way of farming and from now on, I know how to utilize my resources better than before,” he said. “Before the training, I used to sow the seeds rampantly and transplanted without considering spacing or other agronomic practices. However, very soon after applying the skills taught during training, I could see the difference.”

Mr. Puputo and other farmers from Sunya village who participated in the World Vegetable Center/HORTI Tengeru training also started to reproduce the varieties handed out to them by the project team. He and other members of the training group share some of their seeds with others and also teach them how to grow and reproduce the seed for their own production. Because the demand for new varieties and high quality seed is still very high in most of the nine pilot villages located in Babati, Kiteto and Kongwa districts, the project team decided to establish with the farmer groups new demonstration plots that mainly aim to reproduce more seed for farmers. The varieties scaled out by the World Vegetable Center/HORTI Tengeru can be reproduced by farmers for at least 4-5 seasons.

This scaling project has brought success to Mr. Puputo and supports other vegetable growers in the Manyara, Dodoma, Morogoro and Iringa regions. Since October 2014, the project team has introduced best practices and improved vegetable varieties to 12 villages in the four regions, trained 381 farmer trainers, and provided almost 1,000 farmers with Center vegetable seed packs of improved varieties ready to be grown for home consumption and for sale in local and regional markets.

“Vegetables can do what cereal crops might not—namely, to gain yields in times of climate variability.” 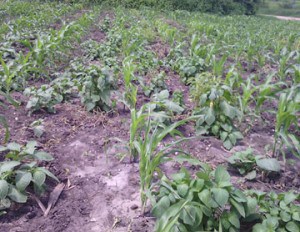 Intercropping in action: maize and amaranth.