Increasing vegetable consumption is important in Nepal, where only 42% of the boys and girls 6-9 years old are estimated to receive the minimum diversity of foods needed for a healthy diet. 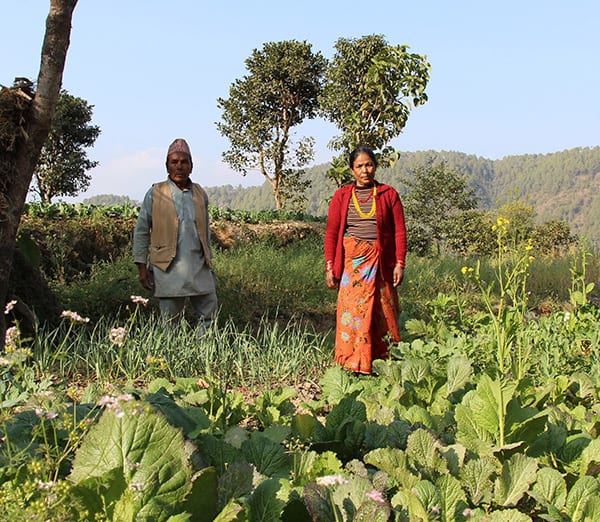 Mr. and Mrs. Tamang in their vegetable garden.

Mr. and Mrs. Tamang are primary caregivers of four young children in Chautara, Sindhupalchock District, Nepal. These are their grandchildren; the children’s parents are working in Kathmandu and regularly send money back home. They have used the funds to construct a new home because, like all other families in the village, they lost their home in the massive 2015 earthquake.

Recently, Mrs. Tamang waited patiently for World Vegetable Center researchers to complete their business at her grandchildren’s school, Irku Secondary School. She had something important to show them.

Irkhu Secondary School is one of fifteen randomly selected schools in a pilot where researchers are testing a novel school garden approach. Children are being trained in vegetable gardening and nutrition using a school garden as a learning ground while their parents receive similar training to set up a home garden. The novelty of the approach is that the schoolteachers are teaching parents as well as the children and regularly visit the home gardens to give advice. Parents say they feel honored to have the teachers visiting their home and do their very best to make their gardens look good, while the teachers say they feel proud to do something meaningful for the community and use the school garden as a model to show the parents what is possible. Children enjoy their hands-on activities in the school garden and like to share with their parents what they have learned at school.

Interviews with parents, teachers and school children during December 2018 showed great enthusiasm for the project. Previously, vegetable growing during the winter season was limited to broadleaf mustard and radish, but now people have learned that they can also grow cauliflower and carrots, and new crops such as fenugreek, broccoli, turnips and garden peas. They also observed that the seed provided by the project gave much better yield than the seed they used to buy.

Mrs. Tamang was waiting to take the visitors to her vegetable garden. In late August she planted nine vegetable varieties provided by the project and wanted to show her carrots, cauliflower, radishes, and huge mustard leaves among other vegetables. She explained that the garden has helped her to serve her grandchildren more vegetables, and particularly a greater diversity of vegetables—and that the children enjoyed eating those vegetables. 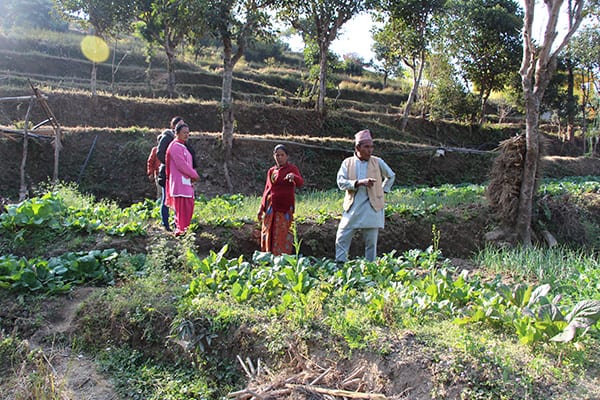 Giving a garden tour to the local schoolteacher.

Increasing vegetable consumption is important in Nepal where only 42% of the boys and girls 6-9 years old are estimated to receive the minimum dietary diversity. Stunting (having a low height for age) affects 32% of adolescents 10-19 years old. Poor health and diets low in essential nutrients are at the heart of the problem. The project “Nudging children toward healthier food choices: An experiment combining school and home gardens” is testing the synergy between school and home gardens to improve the quality of diets among school children in Nepal.

The project is implemented by the World Vegetable Center (WorldVeg) in partnership with the Nepal Agricultural Research Council (NARC), the Asia Network for Sustainable Agriculture and Bioresources (ANSAB), and the Leibniz Institute of Vegetable and Ornamental Crops (IGZ). It is funded by the Drivers of Food Choice (DFC) Competitive Grants Programs, which is funded by the UK Government’s Department for International Development and the Bill & Melinda Gates Foundation, and managed by the University of South Carolina, Arnold School of Public Health, USA.

The Government of Nepal has taken notice of this and a previous WorldVeg school garden project in the country funded by the Swiss Agency for Development Cooperation (SDC). The Ministry of Education, which is also a partner in the project, plans to bring school gardens to thousands of primary and secondary schools and allocated a budget for this in 2019. A new resource book is being developed with input from health, nutrition, education and agriculture experts. “It is a great example of how a pilot project can create impact at scale when efforts are made to create a broad partnership of local government organizations,” said Pepijn Schreinemachers, the Project Manager and WorldVeg Flagship Program Leader – Enabling Impact.

And Mrs. Tamang? She’s looking forward to the summer season and plans to grow tomatoes, leafy vegetables, and pumpkins, among many other crops. 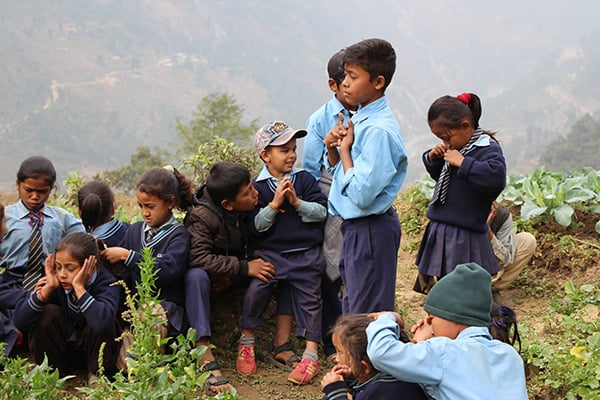 Children in the school garden of Ratna Rajva Secondary School. 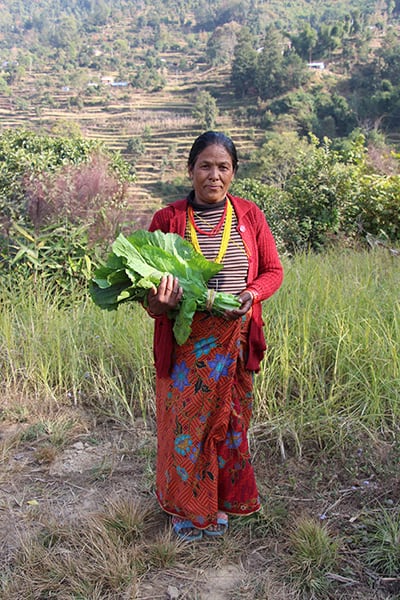 Mrs. Tamang with her harvest of broadleaf mustard.