Vegetable farmers in the tropics need safer solutions to keep pests and diseases in check. Take tomato, the world’s most important horticultural crop. Production of this popular vegetable in the lowland tropics is constrained by diseases such as tomato yellow leaf curl virus disease caused by begomoviruses, which are transmitted by whiteflies (Bemisia tabaci). Bacterial wilt caused by the bacteria Ralstonia solanacearum is another troublesome pathogen that can devastate crops. Plant breeders have developed tomato lines resistant to these pathogens, but over time the resistance breaks down as the pathogens evolve and find new ways to slip through the plant’s defenses.

Dr. Peter Hanson, a tomato breeder at AVRDC – The World Vegetable Center, and his colleague Dr. Jaw-fen Wang, a plant pathologist, are two researchers striving to keep up with this evolutionary table tennis match that pits farmer’s livelihoods against the microbes. “Disease-resistant varieties are the most effective, cheapest, and easiest way to control tomato diseases to benefit small-scale farmers,” said Hanson. 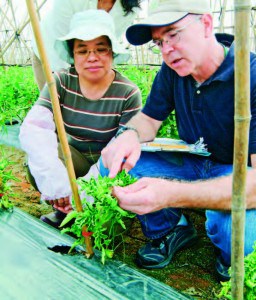 Stable resistance relies on the concept of safety in numbers: Plant breeders aim to achieve it by working wiith several, rather than just one, resistance gene.

Hanson’s work involves pyramiding, or combining several resistance genes into the Center’s tomato lines to deal with the rapidly changing microbial landscape. Gene pyramiding is a breeding technique used to introduce multiple genes into a plant, each of which imparts resistance to a specific pest or disease. Because a pest must overcome all of the resistance genes simultaneously to survive, it is more likely the vegetable line or variety will retain its resistance over a longer period—perhaps for several decades.

Tomato yellow leaf curl virus disease can lead to 100% crop loss if the infection occurs at an early stage. Farmers often misuse pesticides in an attempt to control the whitefly vector, and as a result B. tabaci has developed resistance to the agrochemical arsenal. Using a combination of marker-assisted and conventional breeding tactics, AVRDC breeders have developed tomato lines with various combinations of Ty-1, Ty-2, and Ty-3, three genes drawn from wild tomatoes Solanum habrochaites, S. chilense, and S. peruvianum. Lines carrying these multiple resistance genes to several whitefly-transmitted begomoviruses have been selected for further development and field trials. “AVRDC is the first to develop and distribute open-pollinated lines with multiple Ty resistance for small-scale farmers,” Hanson said. Unlike hybrids, seed from open-pollinated lines can be saved and planted in successive seasons—an important cost-saving measure for farmers in developing countries.

Besides holding begomoviruses at bay, there’s an additional objective the Ty-resistance varieties must achieve: Farmer approval. The new tomato lines must satisfy yield and fruit quality requirements of farmers and markets. Multilocation trials are ongoing in Mali and Tanzania in Africa, and in Karnal, India to solicit farmers’ impressions, comments, and observations about the resistant tomato varieties.

One of the world’s most monitored phytopathogenic bacteria due to its lethality, persistence, wide host range and broad geographic distribution, R. solanacearum infects more than 250 plant species in 50 families, including tomato, eggplant, potato, banana, and other economically important crops. Chemicals generally have proven to be ineffective in controlling bacterial wilt and are not recommended as a means of control.

By planting pathogen-free seedlings and following careful crop rotations, farmers can mount a limited defense against bacterial wilt. Resistant tomato cultivars would further strengthen their position, yet there are currently no fully immune cultivars available. Although cultivar ‘Hawaii 7996’ displays resistance to bacterial wilt, the level of resistance is affected by temperature, soil moisture, and the strain of the pathogen.

“Our knowledge of the nature and genetics of bacterial wilt resistance is improving, but pinpointing the exact mechanisms involved remains a challenge,” said Hanson.

Help in locating those mechanisms comes from AVRDC plant pathologist Dr. Jaw-fen Wang, whose group has been instrumental in the design of the markers linked to bacterial wilt resistance. “This kind of breeder-pathologist teamwork has been critical for our success,” Hanson said. “With the marker maps prepared by the pathologists, we are identifying gene markers in two regions conditioning bacterial wilt resistance—one on chromosome 6 and the other on chromosome 12.”

The marker maps are being applied to assess tomato lines developed by the Center over the past 30 years. “Many of our lines carry ‘Hawaii 7996’ alleles on chromosome 12, but only a few have the alleles on chromosome 6,” Hanson said. “This region already has the Ty-3 gene. By adding alleles and other Ty genes to this region, we have developed lines such as AVTO1010 and AVTO1003, which have moderate levels of bacterial wilt resistance.”

Long-term disease resistance for vegetable crops is a much sought-after goal, if an elusive one. AVRDC’s disease-resistant lines coupled with good agricultural practices such as crop rotation and the use of net houses or net shelters to exclude pests offer farmers an integrated strategy for safe tomato production.