To become a central element of institutional, national and international development efforts, scaling up demands political and organizational leadership, vision and values, and a mindset focused on incentives and accountability, say Arntraud Hartmann and Johannes F. Linn of the Brookings Institute (2008). 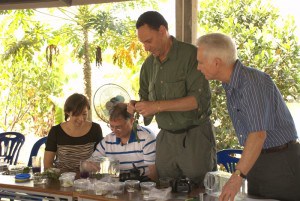 Jackie Hughes, AVRDC Deputy Director General – Research attended the technical sessions and spoke on “AVRDC’s approach to scaling agricultural technologies.” Extensive discussions followed on scaling up as a USAID priority.  She noted the importance of carefully selecting processes for scaling up that have a high chance of success, and of focusing on enabling environments and mechanisms to implement initiatives to scale up adoption of agricultural technologies.

The technical sessions were complemented by a field trip on 10 January 2014 to Kamphaeng Saen to see first-hand some of the technological innovations discussed at the workshop.

Rob Bertram (Director, Office for Agricultural Research and Policy, Bureau for Food Security) visited AVRDC headquarters on 12-13 January 2014, where he continued informal discussions from the GLEE with Jackie Hughes on opportunities for AVRDC within the USAID horticulture funding portfolio. On 13 January he gave a presentation to AVRDC staff entitled “USAID’s Feed the Future Strategy: Science and Technology to Reduce Malnutrition and the Role of Horticulture.” Feed the Future aims to sustainably intensify agriculture by enhancing productivity, transforming key production systems, and improving nutrition and food safety. “The emphasis is on nutrition-sensitive agriculture,” Bertram said. “Horticulture is essential to decreasing poverty and stunting, but it is complex. We need to reach out to small-scale farmers with technologies, and promote greater adoption of these technologies to increase farmers’ productive capacity and integration with value chains.” 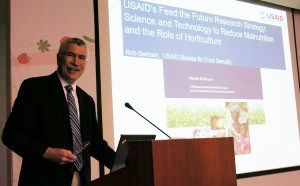