Distinguished World Food Prize laureate, ladies and gentlemen: It is a true honor for me to speak here on behalf of the World Vegetable Center. I would like to make a couple of points to underline the importance of strengthening the vegetable seed sector in Asia and Africa.

The upward production trend in this slide will surely be familiar to you. It shows what is generally known as the ‘Green Revolution’ — the extensive increases in agricultural production worldwide since the 1960s — and in Asia, in particular for rice.

What is much less known is the phenomenal increase in fruit and vegetable production in Asia, particularly since the 1990s. This graph shows what happened in South, East and Southeast Asia. A big chunk of that production increase happened in China. I suggest we call it the ‘Vegetable Revolution’. The Vegetable Revolution has largely been led by the private sector, in contrast to the Green Revolution, which was largely led by the public sector. Both sparked a remarkable transformation of food systems. Yet, the Vegetable Revolution has been little-noticed in the agricultural research community; perhaps because private sector researchers do not write as many journal papers or success stories as their colleagues in public research organizations. This is why it is so important that the founder of a pioneering vegetable seed company like East-West Seed will be awarded the Word Food Prize later this week.

So, what triggered the Vegetable Revolution in Asia? The rise in vegetable production in Asia was driven by a strong growth in vegetable demand, spurred by a combination of rising incomes and urbanization, but also enabled by a rich tradition in Asia of including vegetables in every meal. From the supply side, institutional changes were important. Seed laws and regulations were liberalized in many Asian countries in the 1990s, allowing the private sector to enter the vegetable seed industry. Previously, seed production had been tightly controlled by the public sector, which was a legacy of the public-sector led Green Revolution. Only Taiwan, South Korea and Japan had significant vegetable seed production in the 1980s with Taiwan being the only country producing tropically-adapted vegetable varieties. Western seed companies were hesitant to enter the Asian market because they did not have suitable varieties and were not convinced that Asian farmers, operating on tiny pieces of land, would pay for quality seed of improved vegetables. Simon Groot (founder of East-West Seeds) was one of the first entrepreneurs to recognize a market opportunity and invested in developing tropically-adapted vegetable varieties, first in the Philippines and then in other countries.

Gradually vegetable hybrids started to replace open-pollinated varieties for many vegetables in Asia. This transition did not happen overnight and seed companies had to invest large amounts of money into farmer extension. It was not just about seed but also about providing sound agronomic advice to demonstrate the benefits of improved varieties and associated practices to farmers. Going back in time, perhaps some twenty years ago, my own center was not convinced about vegetable hybrids, but nowadays hybrids dominate the market for most fruiting vegetables. The discussion whether Asian farmers are best served by hybrids or open-pollinated vegetable varieties — a hot topic in the 1990s — is no longer relevant today.

Providing vegetable farmers with advice on good agricultural practices — to make the best out of quality seed — also has been an important factor.

This is not to say that success in Asia is complete. Vegetable consumption still falls short of recommended levels in most countries. We also can see on this slide that 50% of countries in sub-Saharan Africa consume only 70 grams of vegetables per day – far below the WHO recommended 200 grams of vegetables per day and the 360 grams per day seen as optimal by Afshin and co-workers in their 2019 paper published in The Lancet. There is also a risk of decreasing vegetable consumption as consumers increase their intake of meat and highly processed food items. Vegetables are not automatically part of every meal and we need to work not only on the supply side, but increasingly on the demand side.

We see a trend in Asia of smaller seed companies being taken over by bigger ones. This trend is worrying because it is important that seed companies continue to compete for market share by providing the best seed and services to farmers. The vegetable seed sector should have room for a diversity of companies, big and small, because the vegetable market is highly segmented (much more than for cereals).

We must also ensure that Asia’s revolution of greens includes other  vegetables in addition to tomatoes, cabbages and onions. The power of vegetables is in their diversity. Vegetables such as Malabar spinach (Basella alba), water dropwort (Oenanthe stolonifera), water cress (Neptunia prostrata), ivy gourd (Coccinia grandis) and many others are an important part of this diversity, though not all of them will      become seed crops any time soon. These vegetables are highly nutritious and hardy. It is important that we keep them part of Asian diets by investing in them.

The World Vegetable Center genebank has the largest collection of vegetable germplasm in the world, more than 60,000 accessions covering 456 species. This genebank is not a museum — we have teamed up with seed companies to make use of it. Our consortium under the umbrella of the Asian & Pacific Seed Association (APSA) currently counts 43 members. This gives seed companies access to improved germplasm, derived from our vast collection of vegetable genetic resources.

So, let me now turn to sub-Saharan Africa. The production of vegetables has increased somewhat but not with the speed we have seen in Asia. With difficulty we can see perhaps an upward trend after the food crisis in 2007, similar to rice. Many African countries liberalized their seed sectors at about the same time as Asian countries, yet a strong private vegetable seed sector did not develop. There are many seed companies selling vegetable seed in Africa today, but they either import seed (a lot of it coming from Asia) or produce seed of open-pollinated public vegetable varieties — some of it from the World Vegetable Center. The capacity of local seed companies to develop their own locally-adapted vegetable varieties remains very limited.

The factors that spurred Asia’s ‘Revolution of Greens’ were not present in Africa 20 years ago. Demand for vegetables did not grow as strongly because income growth and urbanization were not as strong as in Asia. There also is less of a tradition of vegetable consumption in Africa. Some of these factors have changed and there are new opportunities today to develop a strong vegetable seed industry in Africa.

What can we do to stimulate this development?

First, we need to develop locally adapted vegetable varieties to address the biotic and abiotic constraints in Africa, which are not the same as in tropical Asia. For instance, bacterial wilt is a key constraint to producing tomatoes and peppers in lowland areas of tropical Asia. WorldVeg developed bacterial wilt resistance and this trait has been widely incorporated in commercial hybrids in Asia. But Africa has a different strain of bacterial wilt and Asian varieties are not resistant. Investment in international vegetable breeding for Africa is important to make such key traits available to all seed companies as we did in Asia.

Second, we need to build the capacity of emerging seed companies to develop their own varieties. These      companies must invest in research to remain competitive. Vegetable farmers are best served by a competitive seed industry including small and big companies. The World Vegetable Center can play an increasing role to ensure a level playing field as companies do not need to start breeding programs from scratch, but can work with us to commercialize their own varieties and hybrids. This will ensure “commercial diversity”.

Fourth, we need to maintain the genetic diversity of African vegetables. The World Vegetable Center holds the largest publicly available collection of vegetable germplasm in its genebank in Taiwan—as well as the largest collection of African indigenous vegetables in its genebank in Tanzania. More choice of commercial varieties is a good thing for farmers, but it will decrease genetic diversity in farmers’ fields, which needs to be maintained ex-situ and requires public funding.

To contribute to the development of Africa’s vegetable seed sector, the World Vegetable Center established the Africa Vegetable Breeding Consortium (AVBC) in 2018 under the umbrella of the African Seed Trade Association. This consortium aims to develop a strong vegetable seed industry in Africa and is a perfect example of public-private sector collaboration to move the seed sector forward. It now counts 10 members.

Ladies and gentlemen: Given rampant malnutrition problems seen worldwide, and in particular in South Asia and sub-Saharan Africa, and high and rising levels of youth unemployment as highlighted by the first speaker, we must realize the economic and nutritional power of vegetables.

Now is the time to prioritize investments in vegetables, starting with the seed sector. 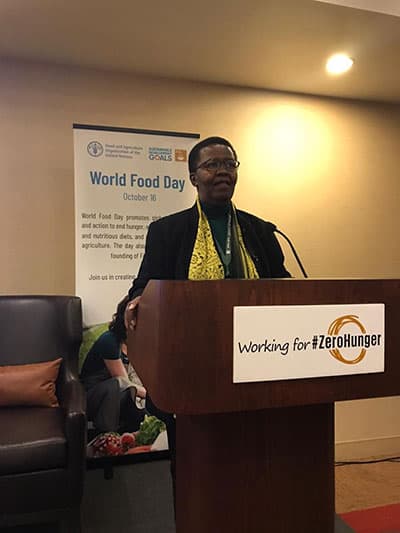 WorldVeg Board Member Lindiwe Sibanda spoke on a World Food Prize panel to discuss seeds and vegetables for the transformation of smallholder agriculture. 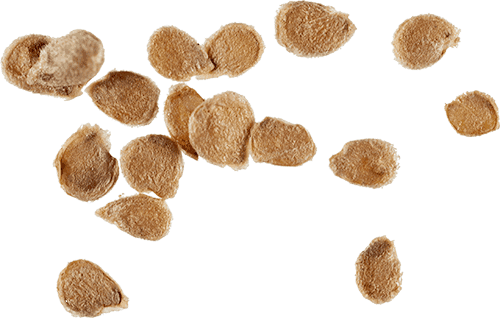