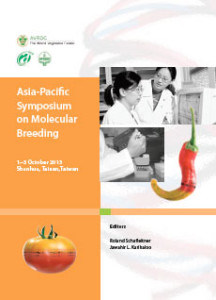 The Asia-Pacific Symposium on Molecular Breeding, held from 1-3 October 2013 at AVRDC headquarters in Shanhua, Taiwan aimed to promote marker-assisted selection in crop and animal breeding in the region to enhance food security and income generation along the whole agricultural value chain. The event brought together more than 60 scientists involved with plant and animal breeding from ten Asia-Pacific countries. The symposium program was divided into three parts: The first part provided a technical update on marker-assisted selection in breeding and on genotyping innovations; the second part reported on the status and the progress of molecular breeding in the countries represented in the symposium; and the final part comprised a networking session designed to build bridges between the research institutions in the region to enhance collaboration in marker-assisted selection for improvement of priority crop and animals.