Kasetsart University operates under the motto “Knowledge of the Land” and was the first university in Thailand to offer degree programs in agricultural sciences. KU boasts 56,612 undergraduate, 9,263 Master’s and 1,789 Ph.D. students with support from 2,986 academic and 6,506 support staff.

KU has four campuses, with the Bangkhen campus serving as the research and administrative hub (including the regional center for the USAID-funded Horticulture Innovation Lab). The Kamphaeng Saen campus is the home of the university farm and experimental sites; the Chalermphrakiat Sakon Nakon campus serves the least developed region, and the Sri Racha campus serves the thriving industrial and economic zones of Thailand.

The WorldVeg East and Southeast Asia / Oceania administrative office is hosted at the Bangkhen campus and its Research and Training Center is on the Kamphaeng Saen campus.

KU has represented Thailand’s membership in WorldVeg since 1980, and the university president serves on the Center’s Board of Directors. Following the creation of a regional training center in Bangkok in 1982, an official 25-year Memorandum of Understanding was signed with KU in 1992 and renewed in 2016 for a further 25 years.

Chongrak Wachrinrat praised the 40-year fruitful relationship with WorldVeg, highlighting important research, seminars, symposia, germplasm exchange, and training initiatives. Since 1975, there have been 216 Thai students and researchers that have benefited from training programs and visits to WorldVeg headquarters. Assistant Professor Buncha Chinnasri, International Affairs Division, stated that the unprecedented length of each MoU was testament to the success of the collaboration between KU and WorldVeg. Dr. Fen Beed, Regional Director for East and Southeast Asia / Oceania, praised the continued support from KU, particularly from its Tropical Vegetable Research Center as well as pathology support for the Center’s global cucurbit breeding program. Dr. Beed is looking forward to the evolution of research proposals with a focus on the nutritional content of traditional vegetables from Thailand, and anthracnose in chili.

It was agreed that high level biannual meetings will be needed to build upon existing collaborations to continue the exposure of KU scientists to international research and development, and for WorldVeg to benefit from technical backstopping from KU’s advanced laboratories and scientists. KU is interested in expanding engagement through collaboration with WorldVeg across the region into newly opened countries such as Myanmar, and into Africa as well. WorldVeg looks forward to benefiting from studentships provided by KU to facilitate research that will drive developmental change in the vegetable sector. 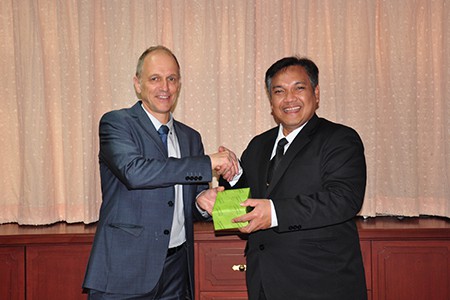 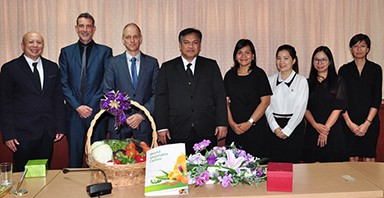 KU and WorldVeg representatives at the signing of the MoU.