Lilian’s children wouldn’t eat the food she cooked. Now she grows vegetables that aren’t bitter, changed her cooking style, and has the kids eating healthy leafy greens every day. 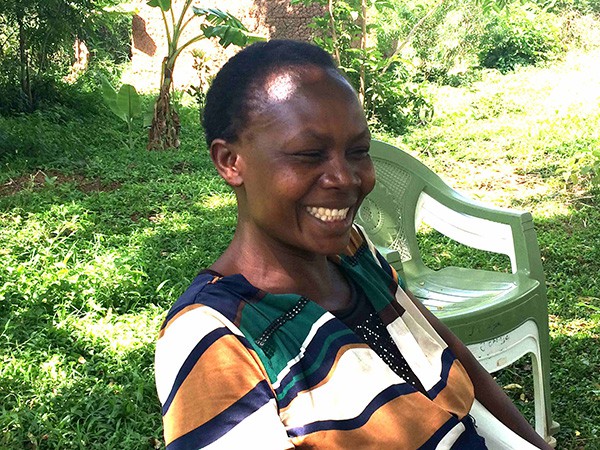 Children will eat vegetables if you prepare them right, says Lilian Nabangi.

Lilian Nabangi from Bungoma County in Kenya is married with three children. She had a problem: her children didn’t like the food she cooked, and sometimes refused to eat. As a result her children were often ill; she took them to the clinic every two months in search of a cure.

Lilian went to secondary school, but dropped out at form 3, a year before the final exam.  Her parents couldn’t afford the registration fee for the exams. She is very bright and charismatic; apart from her mother tongue Kiluhya, she speaks fluent English, Kiswahili and Luo. People in the village area aware of her leadership skills, and have elected her as the secretary of two different women’s groups. Six months ago she went to the local government office because she was in need of fertilizer for her farm. Entrepreneurial as she is, she also enquired about any new initiatives the authorities were planning for her village. When she heard about the USAID Homegarden Scaling Project of the World Vegetable Center, she convinced the government to come and work with her groups.

Project partner Farm Concern International also recognized her leadership potential and trained her to train other farmers, along with staff from Jomo Kenyatta University of Agriculture and Technology (JKUAT). Lilian learned about the use improved varieties of traditional African vegetables, their nutritive value and taste, planting methods, cultivation techniques, thinning, harvesting, storage and cooking. She also learned how to establish a demonstration plot and how to teach other farmers improved agronomic practices.

Her demonstration plot is one of the best in the County, displaying impressive crops of slender leaf, nightshade, cowpea, spider plant and kale.  She cleverly positioned it near a busy road to attract curious passersby, who, when they ask her, also receive an abbreviated training session on the advantages of traditional vegetables and how to grow them.  “Some of these vegetables we knew already and we have been cooking them,” she said. “But after the training on nutrition and using new recipes, I realized that our traditional way of cooking destroyed most of the nutrients.  I used to collect a big amount of spider plant and cook it for a long time, adding a bit of milk. I served it with maize porridge. During dinner, a lot of it would remain, which I would save and cook again the next day, while adding a bit more milk.” She repeated the practice for a whole week, until the vegetables were finally finished. “In the end we were just eating fibers without much nutritive value,” she said. “Now I use new recipes. For example, I fry a bit of onion and tomato, add the vegetables and cook them only for five minutes.  In that way all nutrients are preserved and it tastes delicious.”

The new varieties are sweet and don’t have the bitterness of the local varieties. “My children love it,” Lilian said with delight. “And I don’t need to take them to the doctor anymore.”

Apart from the demonstration plot she manages, she has established her own vegetable home garden using the same improved varieties and techniques.  She harvests a lot of vegetables and can cook a different type of vegetable every day. She even has enough to sell some to customers and with the money she earns she buys small things like soap and sugar. “These vegetables have helped our community and our immune systems,” she said. “The prices of different vegetables in the market are very high for small bundles, and they go up every day.” She is planning to increase her plot to half an acre, to ensure plenty of vegetables for home consumption and to increase her income.

“These vegetables have helped our community and our immune systems.” 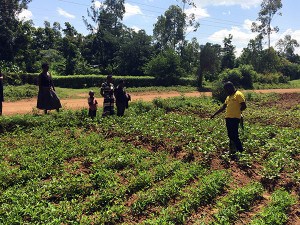 A field full of good taste and health.